Many physicians and their patients, however, are concerned about the well-documented complications and side effects of hysterectomy, including a lengthy recovery period, which typically requires a woman to miss work and/or cut back on other normal activities for up to six weeks. For many women, the permanent loss of fertility after fibroid tumor treatment with hysterectomy is an unacceptable tradeoff for the relief of fibroid symptoms.

Potential drawbacks to hysterectomy include:

From 15 percent to 30 percent of women report decreased sexual function after hysterectomy, and there is an increase in the reported incidence of depression following the surgery.

The surgery also adds to the high cost of treating uterine fibroid tumors, which accounts for billions of health care dollars each year.

With UFE, many women no longer have to choose between living with severe fibroid symptoms and losing their uterus.

Recent studies that directly compared UFE with hysterectomy as a treatment for uterine fibroids concluded that fibroid embolization is just as effective as hysterectomy – and it’s also safer (link to article at National Institutes of Health). UFE results in fewer, less serious complications and much shorter recovery times compared to surgical removal of the uterus with hysterectomy.

Why Are So Many Hysterectomies Performed as a Fibroid Tumor Treatment?

In the past, hysterectomy was the only option for many women suffering from the chronic pain and other debilitating symptoms that a uterine fibroid tumor can cause. Hysterectomy also is a widely available treatment for uterine fibroid tumors, and every gynecologist is trained to perform the operation. Because UFE is a relatively new fibroid tumor treatment performed by interventional radiologists, some gynecologists are not well acquainted with the procedure. Others do not know UFE is FDA-approved and mistakenly believe it is “experimental.” For these reasons, many physicians routinely recommend hysterectomy for uterine fibroid tumors, and often do not discuss other treatment options with their patients, despite growing concern that many hysterectomies are performed unnecessarily.

A study published in the journal Obstetrics and Gynecology concluded that 70 percent of hysterectomies are recommended inappropriately. This is one of many reasons why more and more women with symptomatic uterine fibroid tumors are looking for alternatives to hysterectomy.

The good news is, these factors are beginning to change. Recently, the American College of Obstretrics and Gynecology issued a statement (link to ACOG site) approving UFE to treat fibroid tumors. 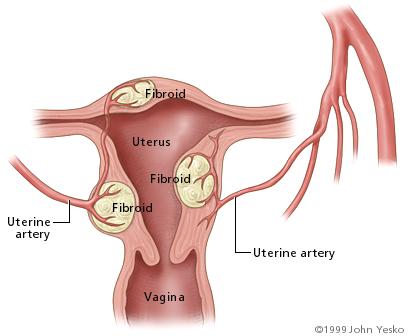